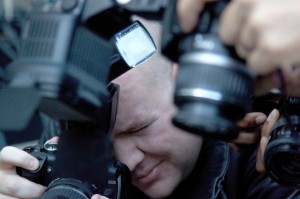 Under the 2010 law prohibiting reckless driving in pursuit of a paparazzi payday, the three photographers who chased Kim Kardashian last Tuesday will not be charged of any traffic violation offense.

In the review of a cam video showing the incident in 101 Freeway last Tuesday afternoon, there was no solid evidence that would positively identify the two shutterbugs of Kardashian. One of the photographers was cited for jumping out of his car to snap photos on the shoulder but will only have to pay a fine.

According to the authorities, the photographers were pursuing the TV star at a speed of 85 mph and beyond. They were even weaving in and out of lane just like in the recent case of Justin Beiber.

A driver from southern Alberta praised for saving four kids from being struck by... read more

Brittney Anna Bowman, a math teacher at Crestview High has been charged with possession... read more

Looks like Republicans have more reason to frown upon Democrats as South Carolina state... read more

How to Replace a Driver’s License

Whether you've lost your driving license or had it stolen, getting a new one... read more

An 85-year-old man in Pirtleville was arrested for DUI after a two-vehicle accident on... read more