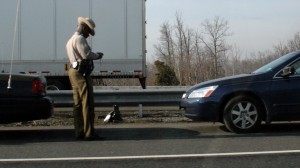 Mickey Lee Hauri, 51 years old, was charged last Wednesday with driving under the influence after the Florida Highway Patrol Troopers spotted him driving into the path of an oncoming vehicle.

According to report, Hauri was traveling west on Easy Street Wednesday evening when he crossed U.S. 41. He then entered the path of the van and was subsequently thrown from his bicycle.

Troopers said Hauri was under the influence of alcohol when the arrest took place. In addition to DUI, he will also be facing charges on failing to yield and use a light when riding at night.

Visit news-press.com for more of this story.

Marie Grant, 65 years old, was arrested for DUI after she crashed into a... read more

Scottish government officials have ordered a decree to try out a speed limit in... read more

Officer David Rosenoff, after getting involved in a car accident, is being investigated for... read more

After finding a 2-year old child unrestrained in a minivan, the St. Mary’s County... read more

Following his controversial arrest in Miami Beach, Justin Bieber has pleaded not guilty to... read more