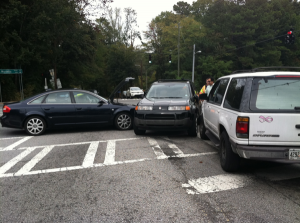 According to police record, an elderly woman was hospitalized because of serious injuries she sustained in the April 5 car crash. Dowling apparently smashed his black Skoda Fabia into another vehicle after attempting an illegal overtake on an unlit country road.

Passing sentence, Judge Sullivan said: “It was obvious from the witness that you were very anxious to overtake that car, and one of the witnesses said you were tailgating it.”

For more of this story, visit basingstokegazette.co.uk.

While nobody got hurt in the incident, a 17-year old Jamie Lee Jaynes was... read more

Melissa Harris, 39 years old, was arrested for driving under the influence on 10... read more

Rusty Janvier, 28 years old, was arrested for reckless driving after a pursuit through... read more

How to Replace a Driver’s License

Whether you've lost your driving license or had it stolen, getting a new one... read more

24-year old Oakland man may face felony charges of driving under the influence after... read more

After getting into an accident while trying to get out of her car, DUI... read more